Sports Heads: Football is the classic football game which has been around for years and have gained popularity among gaming fans over time. You will have to compete in 10 head-to-head football matches and try to win each match by scoring goals using your BIG head and and small legs. You can earn up to 20 achievements in the game by completing specific challenges which are fun as well as a bit difficult. For example, you may have to collect negative power-ups or purposely lose points to gain some achievements badges. After winning 10 matches you can earn a gold medal if you don’t let your opposing team score more than ten goals in the whole game.

Usually the sports games are easy and you can finish them in like 10-15 minutes. But Sports Heads football is pretty difficult. You may find some of the levels to be very easy while other will be very difficult. The game has a good mix of matches challenging your skills in all areas.
The game offers very good graphics and good number of levels as compared to the other games of the same genre. However there are few game play and AI errors in the game which should have been improved. For example, some time the character is too slow to reach near the ball and if he does it becomes very tricky to stop and hit the ball properly. And also if you go pass the other AI guy then there are 90% chances of scoring the goal. Although these errors don’t come often and gameplay is fairly good. For a game of its genre it has very good artwork and unique style of the soccer game. The game atmosphere is pretty attractive with stands and people in the background. Almost all characters are different from others which is a very impressive considering character have only heads.

The music is pretty good and becomes more realistic with sound effect of the crowd creating the environment of a football match. The crowd cheers when you or your opponent scores a goal. The sound effect of ball hitting the ground, walls, net and players is pretty impressive. 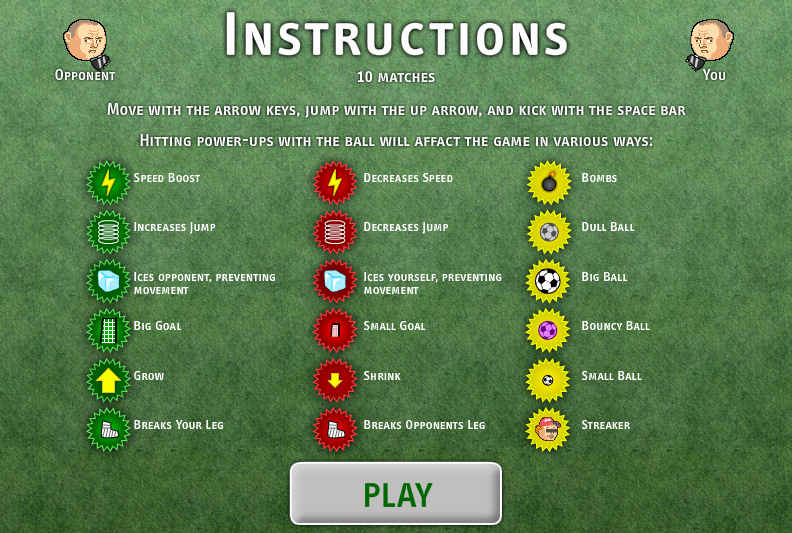 Overall it is a pretty good game and will keep you glued for at-least an hour or so. The game-play is very unique and it also has lot of different power ups which makes the game more challenging. Some power-ups will increase/decrease your speed and some of them can also freeze your opponent for a specific time. Collecting some power-ups will increase/decrease the ball size or will change the goal size. There is a lot more in this game which i am sure you will find out when you will play. So go ahead and try the game and tell us what you think in comments.